Readers first met sassy Kimberly Long in Blogger Girl, and now the feisty New Yorker is back in a sequel packed with quick wit, friendship, heartache, and of course, romance.

After hearing the phrase “chick lit is dead” more times than she’s read Bridget Jones’s Diary, Kim is driven to desperate measures, seeking advice from up-and-coming chick lit author, Hannah Marshak, her high school nemesis and resident “mean girl.” As if Kim doesn’t have enough on her plate balancing her secretarial duties with her blog Pastel Is The New Black, shrugging off the growing pile of agent rejections, and keeping her best friend from turning green over Kim’s budding friendship with Hannah, Nicholas is so blinded by his career ambitions, he doesn’t see that their home sweet home could use more than a dash of sugar.

This is the year when all of Kim’s dreams—professional and romantic—are supposed to come true, but will the story have a happily ever after, or will Kim end up unpublished and all alone. 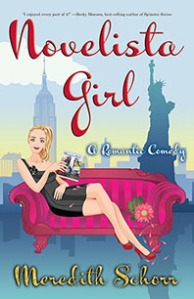 My fourth novel How Do You Know? is FREE on Amazon. Yes free! It is currently number #23 in the entire FREE Kindle store and #1 in Women’s Humorous Fiction AND Coming of Age!!

Life doesn’t happen on a schedule, there are no deadlines in love, and age is just a number.

On the eve of her thirty-ninth birthday, Maggie Piper doesn’t look, act, or feel much different than she did at twenty-nine, but with her fortieth birthday speeding toward her like a freight train, she wonders if she should. The fear of a slowing metabolism, wrinkling of her skin, and the ticking of her biological clock leaves Maggie torn between a desire to settle down like most of her similarly aged peers and concern that all is not perfect in her existing relationship. When a spontaneous request for a temporary “break” from her live-in boyfriend results in a “break-up,” Maggie finds herself single once again and only twelve months from the big 4.0.

As Maggie reenters the New York City dating jungle, suitors present themselves quickly, but who is “The One?” Is he a sexy coworker, one of many bachelors at a speed-dating event, or is he the man she already set free? How do you know? Her fun-loving friends and supportive family, including meddlesome “no-filter” Aunt Helen, eagerly share their (often unsolicited) opinions, but Maggie is determined to find her own way, even if she falls on her face—repeatedly. And finally, my bestselling debut novel, Just Friends With Benefits, is only 99 cents!

When a friend urges Stephanie Cohen not to put all her eggs in one bastard, the advice falls on deaf ears. Stephanie’s college crush on Craig Hille has been awakened thirteen years later as if soaked in a can of Red Bull and she is determined not to let the guy who got away once, get away twice. Stephanie, a 32-year-old paralegal from Washington, D.C., is a 70’s and 80’s television trivia buff who can recite the starting lineup of the New York Yankees and go beer for beer with the guys. And despite her failure to get married and pro-create prior to entering her thirties, she has so far managed to keep her overbearing mother from sticking her head in the oven. Just Friends with Benefits is the humorous story of Stephanie’s pursuit of love, her adventures in friendship, and her journey to discover what really matters